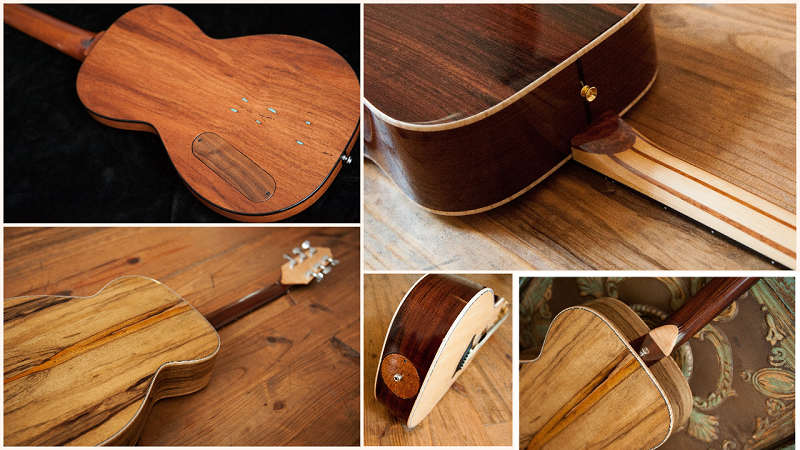 When it comes to making guitars, there is a difference between domestic and exotic wood.

Exotic wood usually refers to lumber that comes from a tropical region. All of the rosewoods are considered exotic. Rosewoods grow in South and Central America, east India and various Asian forests. Mahogany is another type of exotic wood. Most of the mahogany used in musical instruments comes from Central America. Ebony is also an exotic wood used primarily for fret boards. Ebony comes mostly from Africa and India but is found in other parts of the world also. Rosewood, Mahogany and Ebony have been the most consistently used woods on guitars.

Domestic woods usually refer to lumber from the northern hemisphere. Here in the United States, we refer to domestic wood as that which grows in North America. Spruce and Western Red Cedar are domestic woods that are used for sound boards. Walnut and Maple have been used very successfully for backs and sides on acoustic guitars. Here in Texas, I have used domestic woods like Mesquite, Osage Orange and Huisache.

Domestic and exotic woods have both been used to create some of the most wonderful guitars. Exotic woods like Rosewood have been used for backs and sides since the new world was discovered. Brazilian Rosewood has been used on some of the finest guitars. Some people believe that you could not have a fine guitar unless it was built with Brazilian Rosewood. In recent years, most countries have adopted the CITIES treaty which stopped the export of Brazilian Rosewood. Other Rosewoods are now under much tighter import and export controls. I think guitar builders will be looking to domestic woods more and more in the future. Many excellent guitars have been built with domestic wood. Traditions are slow to change, but I believe players will come to appreciate domestic wood guitars as much as exotic.

In recent years many luthiers (including myself) have started using reclaimed and repurposed wood for guitar building. I have purchased Sinker Redwood that was recovered from the bottom of a river where it had been for over a hundred years. I used that wood for sound boards. Redwood logs were floated down rivers, and some of them sank to bottom. These old growth logs are now highly sought after. The same thing happened in the Belize River in the 1800s when the British were harvesting Mahogany. Nowadays, divers are going into these rivers and hoisting these logs out for many uses including guitars.

I have purchased Western Red Cedar that came from trees that were killed by fire in the 1920s but were not accessible by logging trucks. Eighty years later the trees were cut and flown out by helicopter.

With proper permitting Brazilian Rosewood stumps (cut before the ban) can be harvested and resold. With new restrictions come new solutions. Do not be misled by tradition. Domestic woods can produce wonderful guitars, and many of these woods are in abundant supply. Many exotic woods that were ignored in the past are now being explored for tonal qualities with great success. Individual luthiers are leading the way with new possibilities from both domestic and exotic wood.